On Tuesday April 6th, 2010 at 10:45 A.M a building fire was dispatched in the City of Camden. A full box was dispatched along with ALS and BLS due to reports of people trapped.
Companies arrived with heavy smoke showing from the building. The all hands were sounded. Companies led off with a 1 ¾” hand line to conduct a primary search and locate the fire. One victim made it out and transported to Cooper Hospital a couple blocks away. The 2nd victim was located and removed and pronounced D.O.A. outside the fire building.
At the 10 minute mark both victims were located and one line was in operation.
Interior crews reported a firefighter fell through the floor. The F.A.S.T team was sent into the structure as the evacuation tones were sounded. The firefighter was able to exit the building by himself and was not seriously injured.
Car 3 reported heavy fire conditions inside the building as companies were setting up to operate in a defensive operation.
Ladder 3 set up division A and went in operation with the Ladder Pipe. Heavy fire broke the roof line forcing Ladder 3 to shut down operations and relocate. Also hampering the firefighting efforts were burning electrical lines running down the street. PSEG advised command it would take a little while to have them turned off.
The 2nd Alarm was struck. Extra companies were called in above the 2nd to reach an equivalent 3rd alarm.
Companies remained in defensive operation for around 90 minutes before the fire was placed under control. 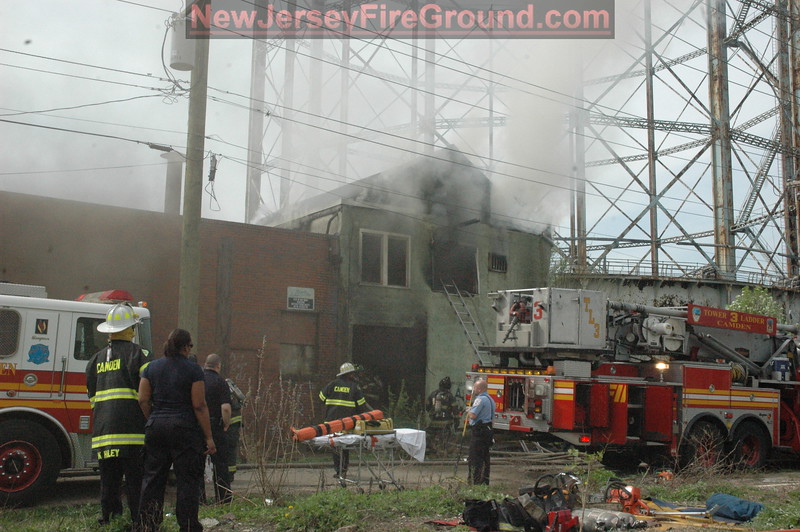